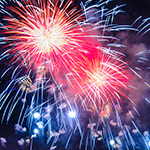 Experience a new festivity or repeat a Quad-City favorite this month.

July 3 at 9:30pm (Dusk) – Red, White and Boom Fireworks with Patriotic Pops by the

July 3 at 9:30pm (Dusk) – Thrill on the Hill Fireworks at Richmond Hill Park

July 6-7 at LeClaire Park in Davenport

Mississippi Valley Fair at the Fairgrounds in Davenport

Egg Hunt at the Sawmill Museum in Clinton

Egg Hunt at the Discovery Depot in Galesburg

Enjoy some of these special events to keep your calendar filled up in January.

MLK Jr. Celebration: The Time is Now at Augustana College in Rock Island

Free Swimming at Indoor Pool at the Center in Geneseo

Mother Daughter Tea at the Butterworth Center in Moline

Bundle up and make the most of the snow by racing down some of the area’s best sledding hills.

Rather ski or snowboard? Head to Snowstar in Andalusia where you can also go tubing.